DriveWorks Solo produces a report for each model it generates as a result of a specification being Finished.

The report gives valuable information that assists with diagnosing any issues with a resulting model.

The On Demand Generation report, for each specification, is stored in the results folder at the project location. A sub folder at this location will be created based on the special variable DWSpecification, which is the project name followed by an incremental number created by DriveWorks Solo. The report is given the name Report followed by a unique number and has a .driveport file extension.

To view a report after model generation:

The report can also be located using windows explorer and browsing to the results folder. 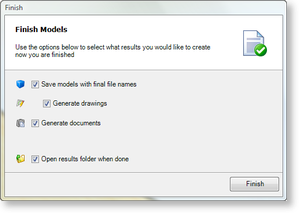 The Report will list each model that was generated from the specification. 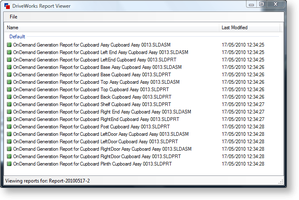 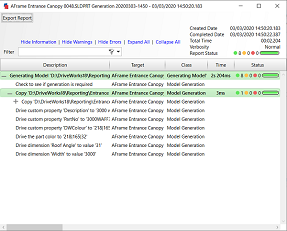 To close the detailed Report Viewer, click the close button.

About the Generation Report

The report details all actions performed on the model. Typically this will be a listing of all parameters associated to or captured against the model and the creation of additional file formats.

The report lists each parameter being driven by DriveWorks, and is divided into re-sizable columns:

The Status column of the specification report gives a good indication that something may require attention.

Status Green - DriveWorks was able to accomplish all actions successfully.

Status Orange - Indicates minor warnings that may require your attention. This could be changing a configuration to a SpeedPak configuration, DriveWorks has to switch to its parent configuration to drive it, so a warning about this is shown. Another example would be when a model requires generating that DriveWorks thinks has already been generated.

Status Red - Indicates DriveWorks was unable to carry out the action and investigation is required. This could be a dimension parameter with the result #VALUE when DriveWorks clearly expects a number.

The time taken to perform an action is useful in speeding up generation, for instance if it is taking 20 seconds to generate any additional file formats, this can be investigated to see if they really are needed for each specification.

To check the Generation Report for values that were driven into a model, follow the steps to open the report above and: